For your reading pleasure, please enjoy this excerpt from our huge 4,500 word interview with 12 Monkeys screenwriters David Webb Peoples and Janet Peoples from our brand new issue #42!

If you enjoy what you’ve read in this excerpt we hope you’ll join us to read the rest of the article by by subscribing to Backstory Magazine!

~Your support is crucial so thanks for considering~
EXCLUSIVE: Subscribers can read the 2 deleted scenes including the discarded original ending to gain further insight into how the classic evolved.
And just for fun – let’s not forget that 12 Monkeys is technically a Christmas film! 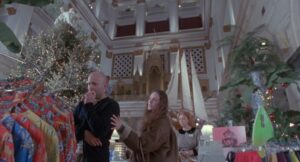 Who knew 25 years after 12 Monkeys hit theaters we’d be immersed in a global pandemic? Yet here we are, and astonishingly the film, with its rich characters, smart sci-fi narrative and realistic pandemic dangers, holds up as strong as the day it was released. and In fact, it ironically becomes the perfect film to watch while quarantining.

Before they became feature writers, David and Janet Peoples served their time in the industry behind the scenes. David cut his teeth as a film and TV editor, and while working on 1973’s car crash flick Steel Arena, he had an epiphany. “I realized I could write a better script than that,” he recalls. “The bar was sufficiently low, because this was not a masterpiece. And I started trying to do better and quickly discovered not only could I do better but I liked doing it and started writing pictures.” Janet had a love for writing as well and planned to pivot to novels when the couple’s kids grew older, but as it turned out she chose to focus more on screenwriting. They worked separately early on but eventually decided to collaborate so their schedules could align, and their first produced credit, 1981’s The Day After Trinity, received an Oscar nomination for Best Documentary. A year later, David’s co-writing credit on Blade Runner cemented him as one of the top sci-fi writers in town. Although the Philip K. Dick adaptation tanked at the box office, it scored serious street cred and, as its fanbase grew, became regarded as a classic.

Halfway around the world, French filmmaker Chris Marker had received offers over the years from artists hoping to adapt his 1962 short film La Jetée, but he refused every one of them. Marker’s 28-minute flick uses beautifully composed black-and-white photos and narration to tell its tale of a prisoner, The Man (Davos Hanoch), who, like all of humanity, has been forced to live underground in the aftermath of a nuclear war. Then scientists find a way to transport him through time in hopes of visiting the past and the future in order to save their present. Producers Charles Roven (The Dark Knight) and Robert Kosberg were determined to bring La Jetée to the big screen and wanted the screenwriters to come aboard. They were delighted to receive the offer…and promptly declined.

The busy couple knew La Jetée was world renowned but had never seen it, but the producers wouldn’t take no for an answer and sent the writers the film. Naturally they loved it…and again politely declined, both feeling the story had actually already been told. “It’s called Terminator,” David says of the 1984 Arnold Schwarzenegger classic. “And copying Terminator would be the dumbest thing you could do in the world.” They agreed to take a weekend to think it over. “When we wanted to see if we could take on a project, would we say, ‘Let’s pretend the producer has kidnapped our kids and we can’t have them back unless we come up with a story.’ ” In their back and forth, they were prompted by a news story to go with a viral/germ-warfare pandemic in order to distance themselves from the Terminator franchise’s angle of humanity’s fiery demise. Another early 1990s article that piqued their interest concerned scientists digging into the permafrost in order to collect samples from the 1918 pandemic in hopes of preventing a future Spanish flu outbreak with the knowledge they gleaned. This would become the same goal for the scientists of 2035 in 12 Monkeys—sending Cole (a prisoner/guinea pig) back into the past to study what happened in a 1996 pandemic that killed off most of humanity while the lucky survivors went underground and animals, unaffected, reclaimed the planet. The hope was that Cole’s information would help them crack the code of the virus so mankind could one day return to the surface. What David and Janet Peoples liked about the twist in the version they were conjuring, with research being conducted via time travel, is that their film wasn’t about stopping the pandemic but rather smartly studying it like the real-life scientists probing the permafrost. “You can’t change the past,” Janet says. “That was our rule. It doesn’t mean anybody will be saved—who was killed in the 20th century—but it does mean these people can come out from underground in the future.” 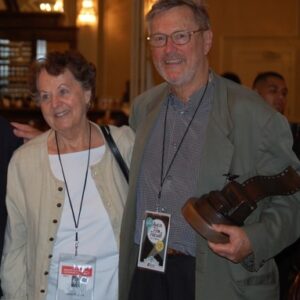 As for developing Cole, the writers focused on what time travel would do to his sanity as he goes back and forth in time on missions with the combined hope of helping humanity and gaining freedom from his undefined prison sentence. “We knew we had this prisoner,” David says. “And we’re thinking, Well, who the hell is he? We live in Berkeley, and you can walk down the street and run into somebody who’s going to tell you he’s just come back from the future. And he knows certain things you don’t know, and such and such is going to happen. And we started thinking that Cole’s been to the future, and while he might remember the future, we may look at him like he’s mad. Then we suddenly realized that the woman from La Jetée— she’d be great as a psychiatrist who’d gradually make him realize he’d never been to the future. But he gradually convinces her he had been to the future, and right there we had the makings of an interesting story.” They told the producers they’d take on the project and were invited down to L.A. to meet Marker, only to learn not only was the writer against having his film adapted into a Hollywood feature but the producers didn’t even have the rights and were hoping David and Janet could pitch him their take before he returned to France. “And we’re going, Oh, Jesus,” David laughs. “That’s not what writers are supposed to do—the producer gets the rights.” As luck would have it, they ran into their friend, producer and Telluride Film Festival cofounder Tom Luddy, at the Chateau Marmont. He knew Marker and told them Francis Ford Coppola was in town and that Marker adores Coppola, so a casual dinner with a spattering of other writers and directors was quickly arranged for that night.

“Francis is talking to the chef for 15 minutes coming up with this menu—because that’s the most important thing, what we’re going to eat,” David says. “And then the food started coming in and everyone’s having a great time. All of the sudden, Francis says, ‘Chris! Jan and Dave want to write this movie. They’re good people, you should let them do it.’ And Chris says, ‘Oh, okay,’ and adds, ‘But no lawyers.’ So Chris, with great trepidation, turned this over to us, just saying, ‘You are the artists. I’m not going to meddle.’ Later on when we let him read our first draft and he found out we made the woman of [La Jetée] into a psychiatrist, he was horrified because he considers psychiatrists to be the priests of America. You have to understand, Chris only liked one Hollywood movie, and that was Vertigo—he even he has some Vertigo references in his film. But at any rate, Chris idealized this woman. It worked in his film, but you can’t do that in the modern world and have an idealized woman who doesn’t do anything.” Janet jumps in: “She’s just there, when the guy kept coming back and meeting up with her. She’s just the love interest.” David elaborates: “We were feeling awkward and uncomfortable, but [Marker] said, ‘No, no, this is your script. You have to do it.’ Later, when he actually saw the film, he told us he liked it—and adored Madeleine Stowe [as psychiatrist Kathryn Railly].” As the project came to life, the writers wanted their friend Tony Scott (True Romance) to direct it, but Universal didn’t feel he was the right match. Ironically, they went for Terry Gilliam, with whom the studio had a big fight during the previous decade over the editing of Brazil. “With hindsight, we realized that Terry was the only guy who could have done it,” David says. “Among the visionary directors, only he and [James] Cameron seemed to have that much story sense. We’re in awe of him.”

Spoiler Alert: The rest of this piece spills details of the film’s narrative

Bruce Willis, fresh off of Pulp Fiction while continuing to make Die Hard sequels, signed on as James Cole, who’s been sent from back in time from the year 2035 to study the pandemic of 1996 and collect viral samples. Of course, anyone in 1996 considers his mission to be beyond loony, so he’s quickly institutionalized and assigned a psychiatrist, Railly, who takes a particular interest in his case. Ultimately as the disparity between reality and Cole’s ever damaged psychosis grows, the question becomes how doctor and patient can help each other and maybe even save humanity in the process.

Although the screenwriters are married, they don’t tend to work in the same room. Rather, they just come together with their respective pages to hash things out. “We don’t do it over dinner, we don’t do it at breakfast,” David says. “Even though we live together, a meeting is a meeting, and we sit down and yell at each other essentially or something like that.” The writers agree their first crack at a rough outline for 12 Monkeys took about 10 days. “We start with a first act,” Janet says, “and we have a pretty clear idea of where we’re starting and where we’re ending. We each go and write a first act and don’t talk about it, and then we read each other’s. David’s a good read-aloud person, and we are very often amazed at what we each have done. Some of it is the same, but there’s a lot that’s different, and usually at this point, one of us clearly has got it so one of you is going back to rewrite with what you both agree on and the other’s going to start the first half of the second act.”

Like what you’ve read? Continue reading the rest of the huge full article – all 4,500 words of it – in Backstory Magazine issue #42 to find out more about David & Janet’s process for bringing 12 Monkeys to the screen including all the intricate plot points and character details they created plus as a Backstory exclusive read 2 deleted scenes!

There’s plenty more to explore in Backstory Magazine issue 42 and we would love to have you join us as a subscriber.

Thanks for your support and stay safe & healthy!

For more info about all the other amazing articles in our current issue #42, view our continually growing issue 42 Table of Contents as we continue building our amazing new issue 42!