The Film’s The Thing For Kenneth Branagh

Please enjoy this excerpt from Backstory’s interview with All Is True director/star Kenneth Branagh from Backstory Issue 37 by Jeff Goldsmith.

This is just small part of our 3,800 word interview and if you enjoy what you’ve read, we hope you’ll consider buying Issue 37 as a single issue or becoming a subscriber.

William Shakespeare had quite a run. He was lauded for writing over 37 plays (many that would go on to become classics) while running the popular Globe Theatre. That venerable venue burned down during a performance of Henry VIII in 1613, sending the Bard into a premature retirement, during which he completed one final play, The Two Noble Kinsmen. What’s most historically interesting about Shakespeare is that while he is known as a wordsmith, there’s practically nothing written about his personal life—by him or others—save for a few public records contained in court testimony, real-estate documents and his will. The lack of information on the man behind the myth has led to bouts of fiction over the years in the form of books, plays and even 1998’s Oscar-winning film Shakespeare in Love (as it playfully imagines his younger years). No one had delved into the scribe’s final years until, fittingly, classically trained actor-director Sir Kenneth Branagh set to directing and playing the man himself in his new film, All Is True.

Branagh has a storied past when it comes to Shakespeare, including having performed a soliloquy from Hamlet for Queen Elizabeth II when he was merely a student at the Royal Academy of Dramatic Art in London. Now, with a script by Ben Elton, he helms an inspired look into the three years before the Bard’s death, when he returns from London to his family in the country town of Stratford-upon-Avon and faces those who, somewhat rightfully, feel he abandoned them—wife Anne Hathaway (Judi Dench) and daughters Judith (Kathryn Wilder) and Susannah (Lydia Wilson). While Shakespeare has no regrets about his London years, he certainly isn’t surprised to learn how those around him have resented some of his choices during that time. Branagh provides an entertaining look into his hero’s wistful homecoming, and it was a pleasure to catch up with him by phone… 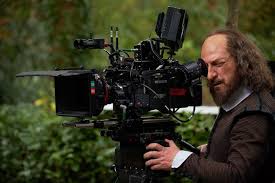 Backstory: The easiest way to start is with your trial by fire: You’re 29 years old, helming your first film, Henry V, for which you were Oscar nominated as both actor and director. What would you say you walked away with as the biggest lesson on your first filmmaking experience.

Kenneth Branagh: To fess up, when you don’t know something, listen to other people. That means listening to the cinematographer, who gives some real helpful advice about how to find a visual rhythm for the movie; when to be inside, when to be outside, when to be in close-up, when to be in wide shot. So Ken MacMillan was super helpful. And David Tringham, our first assistant director, a veteran of films like Lawrence of Arabia and A Passage to India with David Lean, was fantastically helpful in advising about shot selection and choice. You come with your vision of a passionate feeling for the story, but [you need to] look to others for their very valuable help when you don’t know.

That’s great advice for what became a near perfect film adaptation. What scene challenged you the most? There was such a confidence and bravado to that film, but surely there had to be a scene that freaked you out a little.
Perhaps understandably, the most intimidating thing was to begin with the Battle of Agincourt. To suddenly arrive on a Thursday morning, as I recall, when on a field opposite Shepperton Studios, we had to translate what I wanted to be a sort of cross-section of the battle and to experience it as participants would have. This sense of hacking the longest—if you hacked and spun (fought) the longest and most consistently, you had a chance to survive in a medieval battle. So [it was challenging figuring] how to tell that story. Talking to Ken MacMillan and saying, “Well we have 300 people, not 30,000. How do I get this feeling of being in amongst it?” And he said, “Well, I brought the longest lens possible, sir. It’s a 600 millimeter lens. If you stand back here and we put those horses and men 100 meters away, I think you’ll find the effect that you want. We’ll squash them together on a long lens. We’ll keep it nice and tight so you won’t notice the other 29,700 that are missing.” As soon as we put the lens on the camera, I looked through and knew we were off and running. But going into that day, the idea of filming the Battle of Agincourt was pretty darned scary.

You’ve done so many adaptations of Shakespeare’s works. What guides you when you adapt the Bard for the screen, especially in knowing how to edit the text since it generally can’t all translate into a film?
Try to listen to your initial feeling about how scenes or characters should present themselves. In my case, let’s say Henry V again, the goal in the film was to be inside his head, to take advantage of a chance to think about the interior life of Henry V. Believing that some of the spectacle, the battles, could take care of themselves because they place themselves in a very well ordered structure by Shakespeare, who knew how to exploit suspense and emotion. My goal was to try and hold onto my feeling and explore the interior lives of people who were involved in world-changing events that had such consequence and carried such a weight in relation to the lives of others. So it was trying not to veer from that. My advice to filmmakers is stick to your guns. Try to retain your core belief about why you want to tell the story and the way you want to tell it—whether it’s big, small, epic, dangerous, violent, sexy, whatever it is. Whatever kernel of truth you have about that, try and hold onto it. Do not be thrown off by all the other things that the logistics of making a film requires.

Want to learn more about the making of All Is True and read the rest of this 3,800 word interview with director/star Kenneth Branagh in Backstory Issue 37?

Click HERE to purchase a single issue or subscribe to read us on a desktop, laptop or via our iPad app!

Curious about our other articles in Issue 37?

Look inside by viewing our  Table of Contents.