For your reading pleasure, please enjoy this exclusive excerpt from our interview with Watchmen showrunner Damon Lindelof from Issue 39 of Backstory.

If you enjoy what you read below – we hope you’ll join us to read the rest of the article by buying Issue 39 as a single issue or subscribing to Backstory Magazine!

For a limited time you can use code: DOLEMITE at check-out to save $5 off a one-year Backstory subscription.

WARNING: The following part of the article contains massive SPOILERS for the season’s sixth episode, “This Extraordinary Being.” Do not proceed unless you have watched.

If you have seen the standout sixth episode of Watchmen, you now know the big idea that got Damon Lindelof interested in undertaking this amazing adaptation. In the episode we learn that Hooded Justice — the very first masked vigilante — is not only an African American man but he is Will, the grandfather of Angela (Regina King). Hooded Justice is a minor character in Alan Moore and Dave Gibbons’ comics, as he has long retired by the events of that story in 1985. Yet he is crucial to the world because the fact that the character started fighting crime in 1938 sets the template for everything else going forward. Moore and Gibbons never reveal Hooded Justice’s identity, though a character posits that it could be an East German strongman named Rolf Müller. As Lindelof was thinking about what his own version of Watchmen would be, he couldn’t get Hooded Justice out of his head. “Hooded Justice’s identity is one of the things I’ve always wondered about the original Watchmen,” he says. “I love ambiguity in my storytelling so I was perfectly fine not knowing who he was. And the idea of the suggestion that Hooded Justice could have been Rolf Müller — I never took that as a definitive answer for who Hooded Justice was, but he was the first person and the alpha for this whole story. If you took him out of the equation, there were no costumed heroes. In the Watchmen universe, the first significant deviation from our own real history is the appearance of Hooded Justice. This guy showed up in 1938, and for us to never know who that guy was is sort of amazing. So I spent a lot of my time fantasizing about who he was.”

In the comics, Hooded Justice is recruited by a group of superheroes to start a crimefighting group known as the Minutemen. Though their identities were all revealed at one point or another, Hooded Justice’s reveal remained secret, and Lindelof couldn’t help but wonder why. “The greatest act of hubris we could possibly commit doing this version of Watchmen is answering a question that Alan Moore never wanted answered,” he says. “And in answering it, we couldn’t just answer it and be cute about it. We had to answer the underlying question of why. How is it that Hooded Justice could keep his identity a secret? All the other Minutemen were on a first-name basis with one another. So why would he hide it? The answer I kept coming back to is I think he was a black man. In 1938, if you were black man and decided to fight crime, you would be murdered by police and society at large would not think you were a hero unless they believed you were white. So that idea was the beginning of what this season of Watchmen became. It was the first idea I had for the show. I think what we were calling it is ‘surgical retcon.’” Lindelof decided to marry his idea for Hooded Justice’s identity along with his discovery and research of the 1921 Black Wall Street massacre that he has spoken about at length and the event that opens the first episode of his series. In that episode, we see a young Will barely escape with his life. “That event felt like it could be Krypton to me in terms of the superhero origin story.”

Lindelof pitched his writers the idea that not only would Hooded Justice be a black man, he would be the grandfather of the lead of the series they would be creating. But he credits Cord Jefferson — his co-writer on episode six and a veteran writer for The Good Place — for crafting the specific backstory we see in the show of how Will decides to fight crime in the first place and don a different moniker. Jefferson was inspired by Hooded Justice’s costume in the comics, where the character wears a noose around his neck. “We were in that group-think modality and talking about the costume, and Cord pitched out the whole idea that we see in the episode: Will was a cop in New York and encounters a bunch of racist cops who are Klan members. They want to warn him and scare the shit out of him so as a warning they hang him from a tree in a cemetery and cut him down right before he dies. Then he hears the sexual assault in the alley and he isn’t going down that alley just out of altruism, he’s going down that alley out of rage because of what just happened to him. Cord just pitched all that out there, and I was like, Oh, my God, that’s it. From there, everything else in episode six was basically working toward those ideas he laid out.” 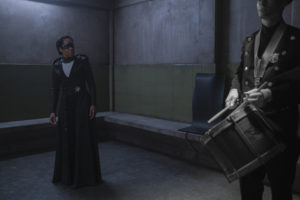 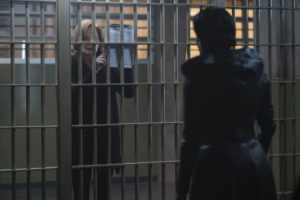 The idea itself behind Hooded Justice and his place in the larger story is enough to power the episode on its own. But what really makes these 60 minutes special is how viewers experience them. Angela downs some pills called “Nostalgia,” a pharmaceutical wonder that contains her grandfather’s memories. So not only are we experiencing these flashbacks alongside Angela, sometimes she herself is in Will’s place in the memories. “The traditional way to tell this story would be to have him sit her down and tell her a story and we would do a traditional flashback,” Lindelof says. “But we thought Angela has to feel what he felt. That’s the only way she could experience his pain as her own and understand it. So we came up with the device of the pills where his memories could be transferred to her. We wanted the audience to experience the story largely as Will but on occasion — particularly in moments of great emotional import — remind them that it was Angela having this experience.” The writers’ unique choice of the depiction of these events ties into one of the major themes of the series as a whole. “I feel like the whole season is about generational trauma. Something that was painful for your parents or their parents gets stored in their genes and somehow passed down to you. So if we’re talking about America through the lens of 400 years of white supremacy and the events dramatized in Tulsa in 1921, the idea of that pain that was visited upon Will as a young boy is a pain that Angela inherits a century later. She doesn’t even know he’s her grandfather but she still feels this thing. She still feels compelled to spray-paint her face and wear a hood for reasons she doesn’t entirely understand. He’s here to tell her why she’s the way she is.”

Did you enjoy this excerpt? To continue reading the full article and tons more in the latest issue of Backstory Magazine, click HERE to subscribe or buy it as a single issue.

For a limited time you can use code: DOLEMITE at check-out to save $5 off a one-year Backstory subscription.

For more info about all the other amazing articles in issue 39, view our Table of Contents.