Emilia Clarke turns the superhero trope on its head

For your reading pleasure, please enjoy this exclusive preview of Issue 44 of Backstory. If you enjoy what you read below – we hope you’ll join us to read the rest of the issue by subscribing to Backstory Magazine!

Emilia Clarke makes the jump to comic creator with a biting and funny story of a single mom turned superhero.
By Danny Munso

Emilia Clarke saw a void in the comics industry, so she decided to do something about it. As one of the stars of HBO’s legendary Game of Thrones — and coincidentally a longtime comics fan — she made frequent stops at San Diego Comic-Con over the past decade but couldn’t help noticing that the event that highlights upcoming film, television and comics wasn’t exactly teeming with female representation. The lack of women in the world of comics and graphic novels in particular bothered Clarke, and she recalled days in her youth when she wouldn’t feel welcome at her local comics shops. After repeatedly voicing her frustrations to friends about why there weren’t grounded female superheroes penned by a woman, she began to realize maybe she could pen that herself. “I’m not a writer—I have to state that for the record,” she says. “I do write, and I have a lot of writer friends. I know what that job is, and that’s not what I do. But I’m always thinking about what stories should be and what kind of stories I would like to be involved in—that’s always happening. As I thought about comic concepts, I found myself wondering why there wasn’t another option. Not even a better option, just another one. I thought it’d be funny if there was a comic-book character that was a little more relatable.”

While Clarke may not consider herself a writer, her resulting comic series — M.O.M.: Mother of Madness — says otherwise. The story follows a single mother named Maya, who as a teen ingested the experimental pills her scientist parents were working on and now exhibits multiple superpowers when her menstrual cycle hits. In the series’ first issue, Maya comes to accept who she is after years of being ashamed of her powers and then sets out to track down a human trafficking ring. The three-issue miniseries balances a nuanced exploration of the degrading way men can view women with a wicked sense of humor that features Maya breaking the fourth wall, addressing the audience in a way Clarke says was inspired by both Ryan Reynolds’ Deadpool films and writer/star Phoebe Waller-Bridge in Fleabag, where that tactic is used to great comedic effect.

It was vital to Clarke that Maya not only be a mom but a single one — so much so it’s how the character first came to her. “I think my hand wrote that’s what she was before I’d even thought about it,” she says. “It was so obvious that’s what her life should be. It just made complete logical sense. When you’re distilling down the tropes of motherhood, it’s always like, Oh, poor thing. But every single mother I’ve met, it’s insane what they do. I wanted to turn the idea of being a mother on its head and have it be colorful and honest and truthful, because these women are achieving 3 million times more things in their day than someone else.” Clarke was partly inspired by her own mother, who wasn’t a single parent but provided like one. “She was the breadwinner. She was working all the time but also very much wanted to be around and be a mum. So I think that’s always been in my DNA — that the women I know who are mothers are phenomenal. That was always a part of the DNA for the character.” Once Clarke started thinking about writing a comic, she got right to capturing the world she envisioned. The result was a 50-page Word document that encompassed far more than what makes it into these three issues. “I just kept writing about not just Maya but all of her people — what the first issue would be, what the second would be, the third, what a spinoff would be, what future issues would look like, what the world is. I wrote the whole fucking thing in its entirety, then I kept tweaking and it just read like a Word document of my rambling thoughts.” 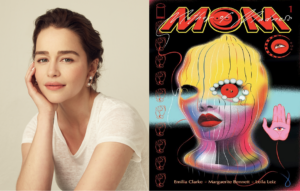 Once complete, Clarke’s agent put her in touch with the vaunted Image Comics, the industry’s third-largest publisher that allows its creators to own the copyright to their material. “I thought that was wicked because this is a weird, weird thing I’m making,” she says. “I doubt DC or Marvel was going to be like, ‘Yes, we’ll make it.’” She told Image she wanted the entire creative team — artist, colorist, letterer and more — to be female, and they offered her a list of suggestions. First on the prospective writers’ list to help Clarke translate her doc into comic form was Marguerite Bennett, the supremely talented writer of series Batwoman, InSeXts, DC Comics Bombshells, Josie and the Pussycats and countless others. “She was the first person I met, and it was actual love at first sight. Within 10 minutes I was like, ‘You are it. You are my guru and my guide.’ She has been my touchstone the whole time. I never felt scared going to her and saying, ‘I don’t understand this.’ I read comics, but I really had no idea how they were made, so it was a big learning curve.”

Clarke and Bennett first met in person in Los Angeles in 2019. but the majority of their work was done remotely via Zoom, with Clarke in the U.K. and Bennett stateside. “We went through that document for hours,” Clarke says. “There was no stone unturned, and then at some point [Bennett] went away and began to write it how it would look in comic form.” When Clarke’s day job was officially put on hold thanks to the pandemic, the pair were able to crank up the progress on the three issues. Bennett would take the story, turn it into script form and pass it back to Clarke, who would make adjustments…and then the process would reverse. “We would tweak things here and there, or I would say, ‘Maybe that was a bad steer by me. Maybe we should change that.’ We would do that back and forth until we were both happy, then we moved on to the next issue.”

The first five pages of Issue 1 are a masterclass in storytelling. Clarke and Bennett start Maya’s story at a work party, where the following things are laid out for the reader: Maya’s personality, her powers and how they work; the book’s barbed sense of humor; and the larger setting around the character, along with the story’s key themes. It all seems quite effortless, yet it was anything but simple. “We worked on that,” Clarke says of the issue’s first few pages, underscoring the effort required. “It’s the thing we spent the most time on because it’s the first 20 minutes of your movie or it’s the first chapter of your novel. People are either going to stick with you or get bored and leave, so we really tried to fine-tune that.” 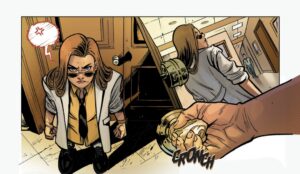 While the series tackles heavy and complex issues — particularly in the way women are treated by men — it was important to Clarke that none of the messaging felt preachy or condescending. “The subject matter is delicate, and that just is what it is,” she says. “There are many men in my life who are wonderful humans I love, and I wouldn’t want them to read it and have them say, ‘Do you hate us?’ I wanted to approach the subject material in a way that felt inclusive. This is entertainment, and I think the best kind of storytelling is when you’re enjoying something and then go, ‘Oh, that’s interesting,’ because it’s approached with lightness as opposed to being somber.” That’s not to say that M.O.M. pulls any punches. In fact, it’s often the opposite. Because the humor of the book can be so welcoming, the more harder hitting elements — like the conclusion of the first issue, when Maya is seconds too late to save a young girl from a human trafficker — are more impactful. “It was a balancing act. And Marguerite and I would go back and forth saying ‘I just read this article or this book, and I think it would be appropriate to touch on this.’ We were saturating ourselves in big feminist topics, and those conversations bled into the way we were approaching this story.”

That said, the series is incredibly funny. There’s a moment in the opening pages where Maya imagines these Renaissance-era paintings of naked women talking back to her as she attends that fancy work gathering. One, in a physically demanding pose, informs Maya that her artist “added extra vertebrae” to be in this position. Another comments on how the position she’s in is “literally impossible” to achieve. The observation sets the tone for the type of commentary-based humor that is plentiful in future pages. In truth, Mother of Madness is one of the most uproarious new comics in some time, and much of that wit springs from Maya’s self-deprecating humor and how the male-dominated world perceives her. It’s easy to see a through-line from Maya fearing her powers are going to draw unwanted attention to Clarke’s public life as one of the world’s most recognizable actress. Perhaps it’s why Maya’s words feel so authentic. “When you’re at your most misunderstood, it can feel like even the walls are judging you,” Clarke says. “I feel that’s a universal feeling. The world can sometimes feel like a strange place.” 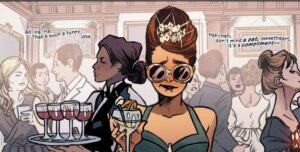 Since the comic runs only three issues—though at 40 pages each, they are considerably longer than most — the question arises of whether there are more stories in this universe. This arc only scratches the surface of what was in Clarke’s original 50-page document but she is quick to point out that the issues only came to fruition because her regular job was put on pandemic pause. “This was a lot,” she says of the three issues. “It required a lot at a time when I was not at a demanding job, so I could give it my all. It really doesn’t matter to me if it does well or not.” As Clarke returns to acting full-time, one wonders if Mother of Madness will need to move to the back burner…and then the truth comes out. “It has been the most rewarding process and it has been massively fulfilling—too much fun to stop.” Sounds like Emilia Clarke is a writer after all.

M.O.M.: Mother of Madness Issue #1 is on sale July 21 from Image Comics

To see all the other amazing articles in the magazine, view our issue #43 Table of Contents!