Inside the process of animating Pixar’s Soul

What does a soul look like, and how does it move? Those were among the many abstract questions Pixar’s brilliant animators had to answer to create Soul, the studio’s latest opus. The film takes place in two worlds: present-day New York City and the Great Before, a hazy location that had to be created from scratch. After the film’s protagonist, jazz musician and middle school music teacher Joe Gardner (voiced by Jamie Foxx), falls down a manhole, we travel with him—and his soul—to a realm where new arrivals get their personalities before they go to Earth, to begin again as newborns. It’s here where Joe meets 22 (Tina Fey), who agrees to help his soul return to the Land of the Living and re-immerse with his body. The Great Before presented a number of challenges for the animation team, led by supervising animators Jude Brownbill and Bobby Podesta, and helped make Soulone of Pixar’s more ambitious undertakings. “It felt like we were making two films in a way,” Brownbill says. “We didn’t have to make just one Joe. There was human Joe and the soul equivalent of Joe. They had different animation styles and rendering styles, and that’s what made it feel like a big task. Then we had New York, which is a huge city to build and populate, and the soul world—what would that be? The scope of it made it feel like a big task.”

“It’s two worlds,” Podesta echoes, “but it has to feel like one movie. It’s one thing to make a distinct style in one film and then do the same on another film, but in this they have to be in one movie and relate to one another yet be distinct. It’s an oxymoron. Be different but be the same.” Marrying the disparate realms started very early on in the project with the drawing of Joe’s human and soul incarnations and making sure there was synergy between the two. “We always looked at them together,” Brownbill says. “Do they look similar? Is it going to translate? Are people going to recognize Joe in the soul world?” That was one reasons why Joe’s soul form retains his human character’s trademark hat and glasses. “We decided that if you’ve lived on Earth, your soul would be represented as the way you saw yourself on Earth. Joe saw himself in the hat and glasses. It’s almost like his costume. He’s a teacher, but he desires so much to be a professional jazz musician that having the hat is his jazz uniform in a way. It’s very important to him and a part of who he is.” Podesta recalls one time in the animation dailies, where they present their work to the film’s heads—director Pete Docter, co-director Kemp Powers and producer Dana Murray—when he knew the merging of these two different worlds would translate to the screen: “Late in the film, there’s a cross-dissolve between human Joe and soul Joe. You look at them and you think they’re two unique designs, but there’s a shape language at the root of it and the dissolve works perfectly. I remember thinking, Oh, it works. All that design philosophy and execution in art and modeling and animation got to that point where it just totally works as a moment.” 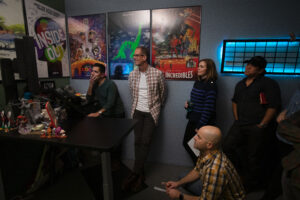 In Pixar films, a central character like Joe is always animated by dozens of different animators, because crafting a singular performance that tracks throughout an entire film is an almost Herculean task, though a lot of it comes from natural trial and error. “We spend a lot of time exploring in the beginning,” Brownbill says of the many approaches. “It’s a lot of trying and failing. It was a small team at first, and the character got better because we were all chipping away at it. There comes a point where you’ve seen the work everyone has done and you go, Okay, I think I’m getting the hang of who this person is.” Podesta credits the creative environment fostered over decades at the animation giant for the flawless synergy that results. “There’s really open and honest dialogue between us all as we’re looking at each other’s work,” he says. “We’re all open to feedback. No one is trying to say, ‘This is my scene’ or ‘I’m the star of this.’ We are all collectively working together, and that takes time, even years, of relationships and trust that’s built up before this film that will carry to the next films and everything else we do. Once you have that type of environment, then you start to have a level of collaboration in terms of trying to find the performance that works best for the character, not the performance that works best for you or that’s going to make your moment shine, because you know it’s important. All of our work gets better because of each other.”

Podesta makes sure to note that having Pixar veteran and current chief creative officer Docter as director is a major benefit to both the supervising animators and those under them. The reason? Docter was an animator himself. He learned at the hand of legendary Disney creator Joe Grant and was the first supervising animator at Pixar, debuting in 1995 on the studio’s first feature, Toy Story. “There’s never a time when we as animators do something, and [Docter] goes, ‘I don’t know how you do what you do,’” Podesta says. “No, he knows exactly how we do what we do. It creates this opportunity between the animators and Pete to really talk about the craft of the performance and get the nuance Jude is talking about. He could really talk in a way the animators really understood about how he wanted Joe to move. An opportunity to work on this as an animator with a director like this doesn’t always come around.”

Docter was heavily influenced by the classic Disney film 101 Dalmatians for the look and feel of Soul, and that translated to the animators. Joe would have long limbs similar to lanky Roger in Dalmatians so they honed in on that to help define human Joe’s movements. “We borrowed some of the animation principles and ideas from that movie,” Brownbill says. But those principles weren’t applicable when Joe left the earthly world and was no longer in charge of his own body. If you’ve seen the film, you know that at some point 22’s soul finds itself in control of Joe’s body, as first seen in a slapstick scene that has his limbs wildly flailing. But because the filmmakers didn’t want that to be the case in the rest of the scenes, Brownbill and Podesta came up with other ways to visually cue that Joe’s soul wasn’t in control of his physical being. “Joe as himself is very tall and slightly awkward,” Brownbill says. “He holds himself with more sophistication and control, whereas 22, when she’s in his body, is a little more slouchy and childlike in a way. We tried to find subtle ways to show that without going overboard.” 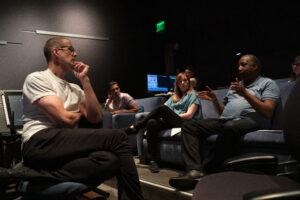 The film contains a series of characters called Counselors who presented the animators with a major challenge. The Counselors lord over the Great Before, and as they tell the audience, they can appear in any form they choose. In Soul, they’re two-dimensional lines that often take a person-like shape, yet their movement is like nothing found in this world. “I’ve never seen anything like this in a film,” Podesta says. “It’s a little crazy. You almost look at it and go, oh, that’s kind of simple, but it’s the opposite of that. It’s not a 2D line. It’s a three-dimensional 2D line. It’s a piece of art, but it’s also a character. So the animator has to be an artist and an actor at the same exact time to make it seem simple and clear for the audience. A lot of work and brain power and artistry went into creating them, and it looks beautiful. But it’s not as easy as it looks.”

A seemingly simple and quiet moment near the end of the film was the subject of many discussions in the animation dailies. Joe is at the piano and, as he plays a beautiful piece of music, begins to picture key moments in his life. In between the flashbacks, the film keeps cutting back to his face—the majority of which was done by animator David DeVan—showing a series of subtle yet effective emotional reactions to the images we’re seeing. “That through-line of Joe’s reaction to those memories, the animator worked really hard on that,” Brownbill says. “It was about trying to give just a slight flicker of the eyes or a curl of the mouth. That progression was talked about a lot because we wanted to make sure it landed right.”

Like most things in 2020, the production and release of Soul was massively impacted by the COVID-19 pandemic. The film was originally set for theatrical release in June, was forced to shift to a Thanksgiving release, also in theaters, and finally settled on a Christmas Day release on Disney+. Luckily, the majority of the animators’ work was completed before California—Pixar is located in the Bay Area city of Emeryville—shut down in early March. “We knew it might be coming so people started splitting up their work and helping each other out so we could get as much done before we were all sent home with our computers,” Brownbill says. “Then we all had to log into our computers the next day and just hope it worked. We had about two weeks left to do, and a small team took it home for those last couple weeks.” But, as Podesta notes, not everyone involved with the film was so fortunate: “All the other departments after us had a lot more to do, but animation kind of lucked out.” For viewers, the added stress never appears onscreen, and while it’s having a decidedly untraditional roll out, Soul is destined for a place in the Pixar pantheon.

Now more than ever, your support is crucial so please consider subscribing to Backstory!

You can also use coupon code: SAVE5 to take $5 off your subscription!

For more info about all the other amazing articles in our new issue, view our Table of Contents.