For your reading pleasure, please enjoy this exclusive free 1500 word excerpt from the 3,400 word article in the latest issue of Backstory.

If you enjoy the below excerpt – we hope you’ll join us to read the full version of the article and the rest of the issue by subscribing to Backstory Magazine!

By Jeff Goldsmith and David Somerset 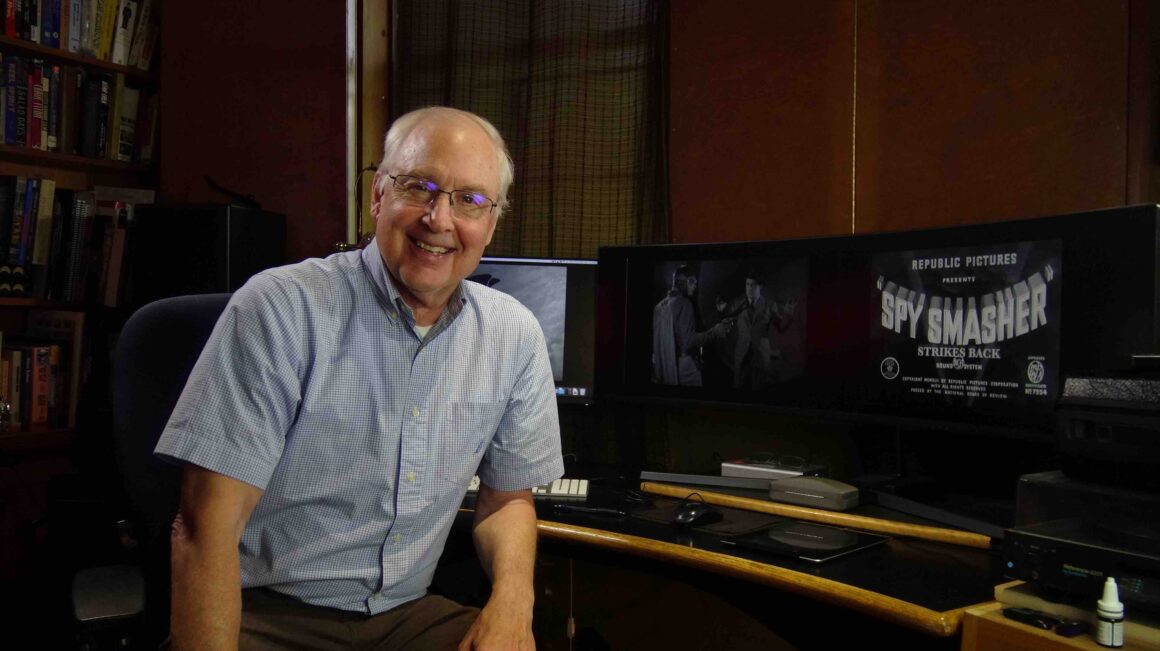 (Above: Ben Burtt in his editing suite working with Spy Smasher in 2022)

Every film fan knows who Ben Burtt is. His name is in the cinematic pantheon thanks to his groundbreaking work on movies such as Star Wars, Indiana Jones and several Pixar films, with a slew of Oscar nods and wins going back to 1978. He will forever be seen—and heard—as the man who created the voices of Chewbacca and R2D2 as well as other iconic sounds, including lightsabers and the giant boulder that threatens Harrison Ford’s fedora-clad adventurer. One of the earliest crew members brought aboard 1977’s Star Wars, he was a key part of helping George Lucas shape what would become his behemoth franchise. 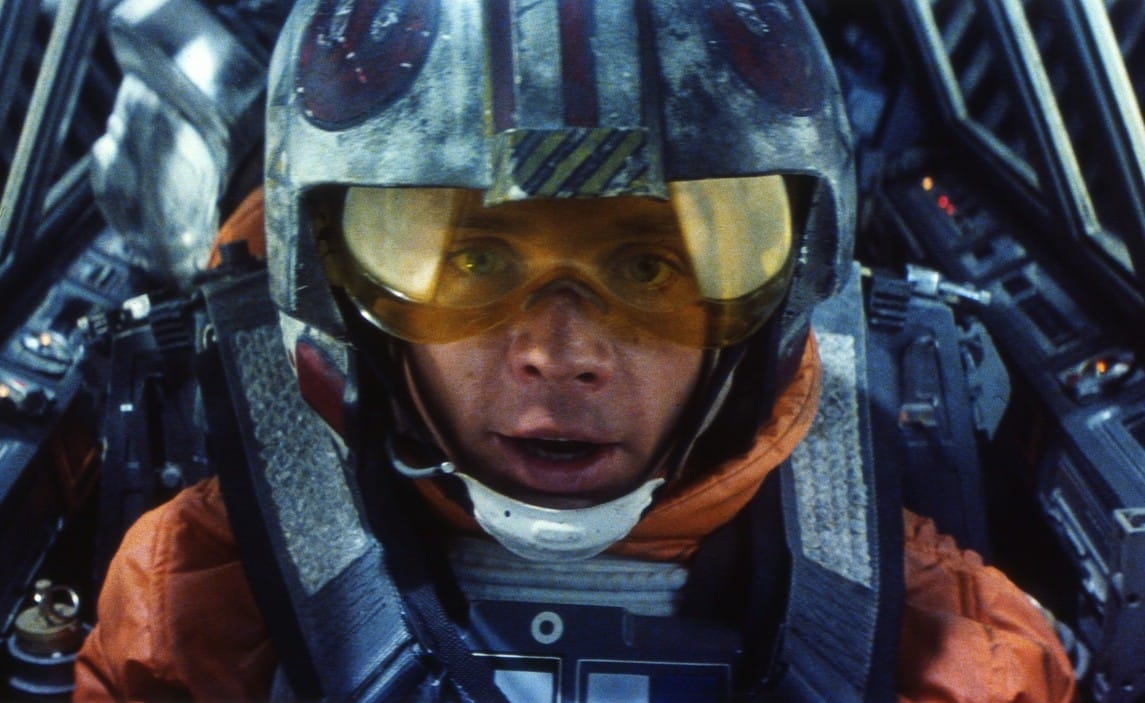 When editing Star Wars, Lucas reached a point where he was ready to show a rough cut to his friends, but the film was still many months from receiving completed special effects from Industrial Light & Magic—the finale with the Death Star space battle among them—so the editorial team spliced in placeholder material from various sources, among them newsreel war footage and movies such as 1955’s The Dam Busters. 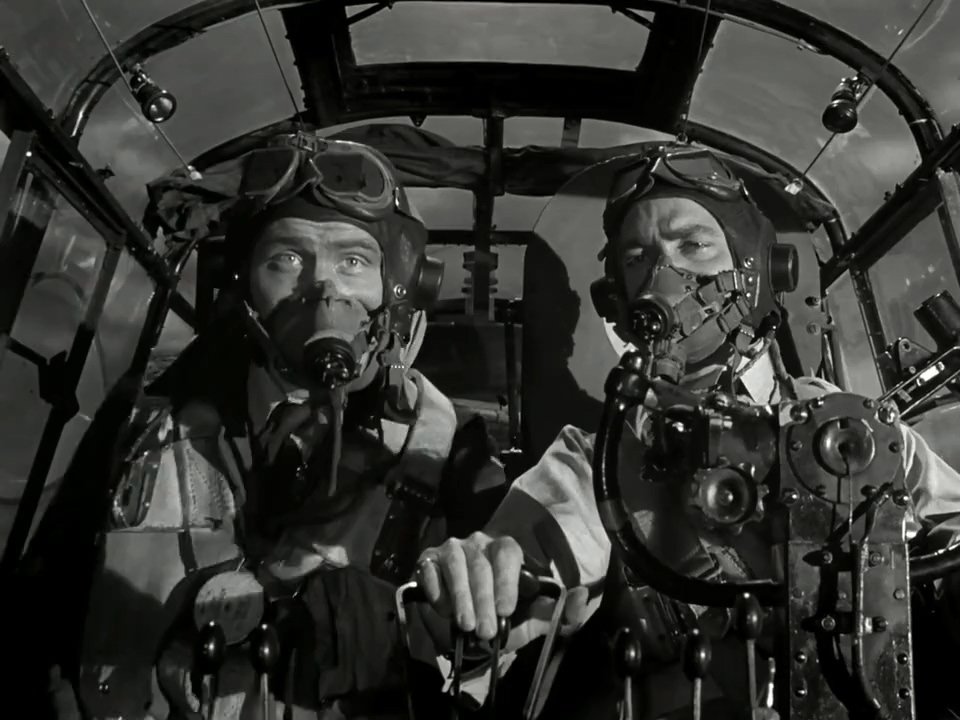 Lore has it that when Lucas screened this cut for Steven Spielberg, Francis Ford Coppola and Brian De Palma, the group was enthusiastic about the film but also slightly confused by the juxtaposition of the black-and-white war plane footage. “Dam Busters had this wonderful sequence of traveling toward the dams to drop a bomb and a fleet of aircraft that are getting closer and closer while they’re under fire from the mountains all around them,” Burtt recalls. “It became a template for the Death Star trench run. And in the earliest version of the film, before we had any real special-effects shots made, of course I was cutting in sound for these bad dupes of old movies that represented the motion and the design of shots. I understood it completely. It was a great way to start determining what you really wanted before you spent the money of having the effects people do it. And as the film developed and the special effects came in from ILM, they began to design shots that were taking that as the template, and then of course the sounds began to make more sense. It didn’t throw me off to see Lancaster Bombers instead of the Millennium Falcon.”

When Burtt wasn’t creating some of the most famous sounds in cinema, he was honing his skills as an editor and dabbling in screenwriting. In fact, he has a couple of great unmade stories in his archive, his favorite being There When It Happens, which follows a young newsreel cameraman and his crew in the 1930s as they dashed around the world filming big events such as the Hindenburg crash. Despite his long experience in other filmmaking arenas, Burtt didn’t have the clout to get the movie produced, and ironically the concept was effectively put into permanent limbo by the 1992–93 TV series The Young Indiana Jones Chronicles, in which the budding adventurer travels the globe and occasionally witnesses historical events. The upside was that even though he set aside his script, Burtt not only worked on the show’s sound design, he did second-unit directing and even helmed a full episode. A TV movie was responsible for curtailing another of Burtt’s screenplays, The Invincibles. “The idea is that these two Civil War–era ironclad ships, the Monitor and the Merrimack, were doomsday machines in the minds of the United States and the armies of the day because they couldn’t be broken apart by cannon fire,” he says. “And the biggest fear the Union had was that the South would come up the Potomac, bombard Washington and they couldn’t do anything about it. [To them] it was a nuclear war, and so they pitted their own doomsday machine against it. It was a huge fear. Lincoln was like Kennedy
in the Bay of Pigs. He’s pacing the floor saying, How can we stop this machine? It’s gonna destroy the world. And it was a very interesting story.” 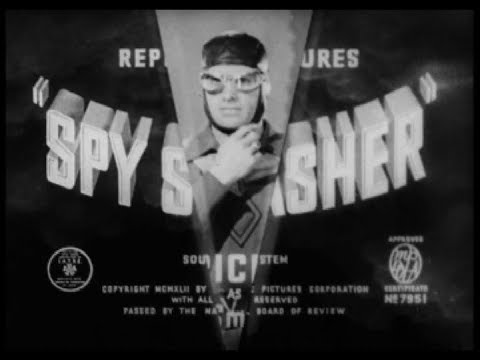 Unfortunately, while Burtt got to the point of working with a producer to figure out the budget and even envisioning an IMAX movie that would encompass the scope of the story, Turner Pictures’ 1991 home entertainment release The Ironclads, which mixed history with invented love story elements, sailed in and took the steam out of Burtt’s Invincibles film. Now so many years later, Burtt says he might consider dusting off his script to have another go at the project to benefit from the special-effects capabilities of contemporary cinema. He’s certainly in a creative period, as the editor poured all of his filmmaking mastery into his latest project, which screened to a sold-out audience at the TCM Classic Film Festival this past April in the heart of Hollywood. The film evolved from a wild concept in which Burtt remixed and reedited a feature-length version of the 1942 Republic Pictures Spy Smasher serial entitled Spy Smasher Strikes Back. Stemming from the pages of Fawcett Comics’ Whiz Comics #2 in late 1939, Spy Smasher (the mild-mannered Alan Armstrong, played by Kane Richmond) was soon eclipsed by another character who also first appeared in that issue, the original Captain Marvel––or as modern audiences know him, Shazam. Not surprisingly, Spy Smasher’s raison d’être is to stamp out espionage and sabotage by the Axis power curmudgeons. After World War II, the character slipped into obscurity and is rarely, if ever, used by its publisher, DC Comics. But Republic certainly squeezed the value out of the character, crafting a 12-episode serial of his adventures battling the evil Nazi villain known as the Mask (Hans Schumm). 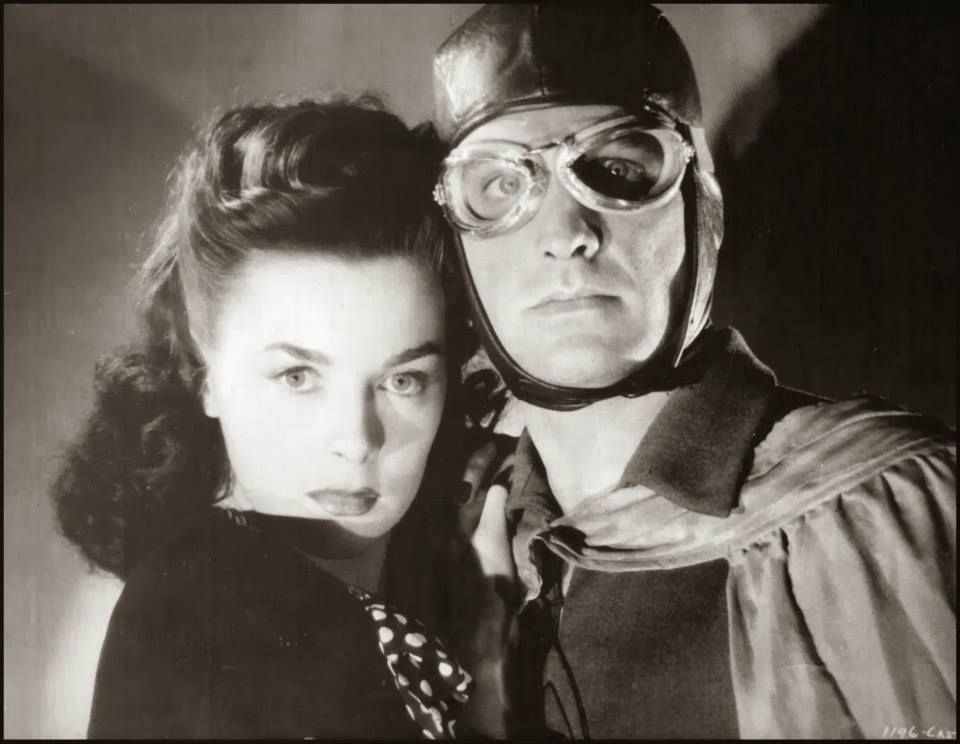 Burtt first encountered Spy Smasher through Paramount archivist Andrea Kalas and her restoration group, who have been preserving the serials. Nitrate, duplicates and, where available, existing original prints are digitized and restored for archiving. “I saw some of Spy Smasher that they were doing, and I thought, Wow, this could be fun. Can I see the whole serial? he recalls. “Immediately I began thinking, Well, how can I share this with my friends, my family, my TCM audience? ” Concerned that just screening the entire run of the serial would turn off modern viewers—and numb backsides—Burtt had a lightbulb moment. He wondered if he could find a way to “compress the story down while keeping all the fun action moments, and see what happens…I looked at it as an experi­ment. I asked Andrea whether I could do this, and they didn’t stop me. They said, ‘Here is a 4K transfer,’ and just let me go.” Ultimately, he chopped down all 12 of the 16-20-minute serial episodes (215 minutes total) into a tight 94-minute feature that he feels mirrors the style of a contemporary popcorn cruncher.

The master editor knew from the start this filmic experiment would wind up being a lot of work, and that’s precisely why he chose it. “I love an editorial challenge, and I’m always amazed in the films I’ve cut how much you can, at that last stage, manipulate things in an almost endless fashion. Not necessarily for good always, but because you’ve got all this imagery and sound and you can play around with time and space and move things and try different orders, there’s a point where you do abandon the script in many cases. You abandon your storyboards. You’ve done all you can, so now you say, Let’s break it down and see what we can do to energize this. I’m continually impressed by how sometimes a small change [like] dropping a whole scene or instead of [ordering scenes] A, B, C, it’s C, A, B, and that just works a heck of a lot better.” 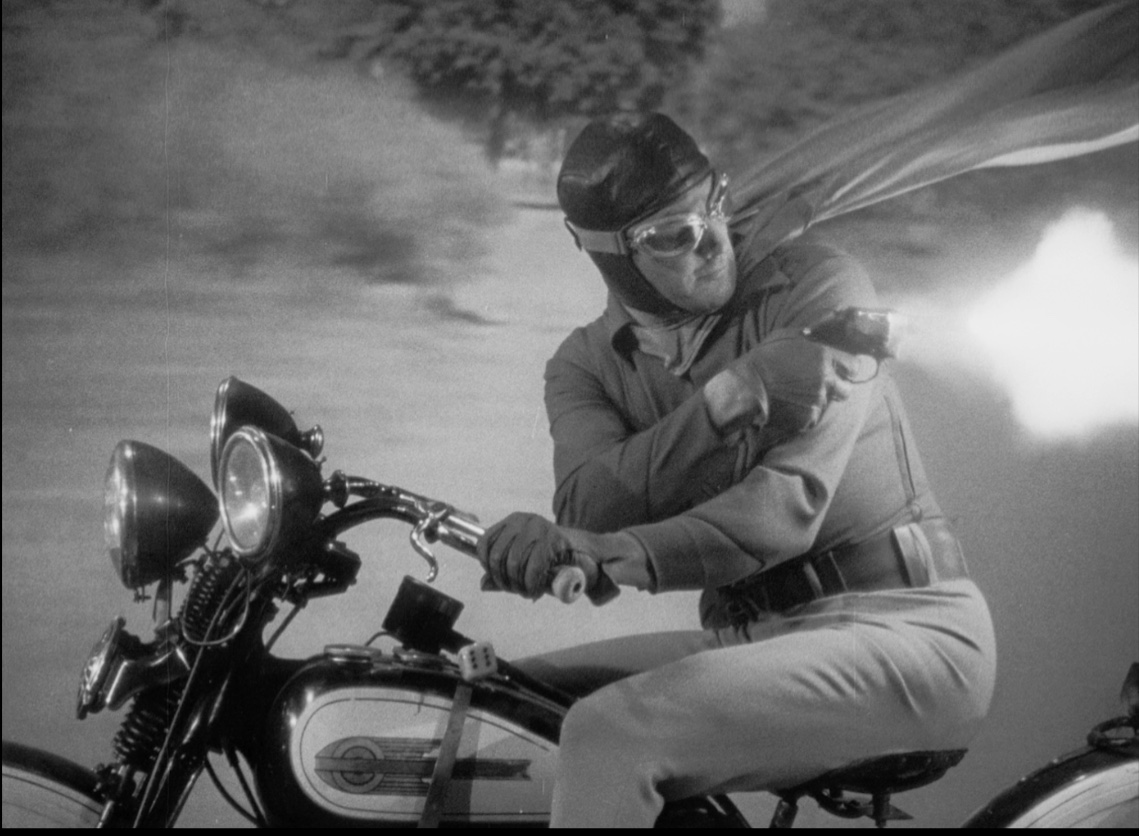 The project may not have started with storyboards or a script, but once Burtt screened the serial and formulated a plan of action for the reedit, he drew up an outline on notecards for the new story he was intending to shape from the episodes. “I’m still a bit old school, so I didn’t do it digitally in the computer. I had cards I could move around and just look and see: Is this gonna work, and how long am I gonna be here? One of the things I was trying to achieve was to have it build to some sort of bigger climax. That meant I took the action sequences and tried to order them such that there’s a build toward the ending of the original serial, which is an [Axis] submarine attack on an [Allied] oil refinery. But in the steps leading up to that, some of those things were taken from much earlier in the story because I felt it had more impact and a sense of growth.” Part of his plan involved eliminating the redundant recaps and repetitions used to pad the original episodes, along with tons of exposition to remind audiences about the ongoing story as they watched it weekly. The excision of these elements—generally two-thirds of each serial—makes for a visceral experience with a rollercoaster-ride feel of cliffhanger scenes resolved moments later as the film continues barreling forward at a brisk pace.

The originals weren’t too deep on character moments, yet Burtt allows for the key friendships and awkward love triangle elements to remain intact. Given the more limited budgets and shorter production schedules of the serials, there are a lot of recurring pieces, which gave Burtt an idea for one particular sequence: “There are four fights in warehouses. I just put them all in one giant fight because I could intercut them. Sometimes I did a little bit of visual effects to get past that point where someone might notice a funny breach of continuity. One warehouse fight had fire, the other one didn’t, so I had to add fire in the one that didn’t. I couldn’t remove fire, but I could add it.”

We hope you enjoyed this free excerpt!

If you’d like to read the rest of the Spy Smasher Strikes Back article (another full 1,900 words with in-depth info about Burtt’s process) we hope you’ll support independent film journalism and subscribe to Backstory Magazine!

There’s plenty more to explore in Backstory Magazine issue 47 you can see our table of contents right here.