For your reading pleasure, please enjoy this exclusive preview from Issue 47 of Backstory. If you enjoy what you read below – we hope you’ll join us to read the rest of the issue by subscribing to Backstory Magazine!

Thomas Kivney on penning an action/rom-com script the reels in high praise and launches his screenwriting career.

Not many scripts can seamlessly alternate between touching romance and stomach-churning monster attacks, but not many scripts are Max and Tony’s Epic One-Night Stand, Thomas Kivney’s genre mashup that earned a coveted spot on the 2021 Black List. Kivney’s story follows the titular duo, who after an awkward hookup are forced to navigate an invasion of alien creatures multiplying at a rapid rate. Kivney has long been an unabashed fan of epic genre films, and he’d always wanted to see one that reflected himself. “There are so many queer stories told on a smaller scale, and I just wanted to do this huge, crazy, insane blockbuster with characters we’ve never really seen in the epicenter of a movie like this,” he says. “We don’t get to see these types of stories told on this kind of scale. It’s 100% the movie I would be dying to see.”

Growing up in the Boston suburb of Hingham, Massachusetts, Kivney aimed to be a writer. After graduating from Middlebury College in Vermont, he lived in New York for six years while working for an agency as a book-to-film scout, meaning it was his and the agency’s job to find books and graphic novels for the likes of Warner Bros. and Netflix to produce. “It was a useful period in terms of understanding what works and what translates,” he recalls. “Pitching other people’s stories to our clients was really helpful in terms of learning what are the points that would draw people in that could inform my own writing.” In his spare time — mostly in the early mornings — Kivney would work on his own scripts. “I cranked out a lot of really terrible ones during that period that I will never show to anyone else, but the more I did it, the more I wanted to do it full-time.” He soon got into AFI’s masters film program, which meant a relocation to L.A. — six months before COVID shut everything down. Though classes were relegated to online, he tried to make the best of it. “I’d frame it as the worst way to do film school but the best way to do lockdown. I wasn’t just locked into my own head. I had this community of other writers that we could share things with.” This is also where the first draft of Max and Tony was born.

The idea for the script, however, dates back beyond that to Kivney’s time in New York, as he traversed the complex world of dating apps most of us have experienced. “It was in the back of my mind for a while,” he says. “It grew out of my time in the online dating world and how weird that can all be and how, even in the best of times, it can feel so impersonal a lot of the time. I wanted to create a situation where it was the most awkward date imaginable but also throw them into a situation where the walls [people] build up are completely torn down and these two people see the real person on the other side. So what’s the craziest situation possible that can force these two guys to stay together after this disastrous sexual encounter?” He briefly toyed with a crime/thriller element, where the two characters witness a murder and are on the run from some dangerous people, before he swung back to the sci-fi stories for which he has such a soft spot. “I love genre storytelling and just decided to go full Cloverfield or The Thing with it.”

Kivney never wrote a draft of the script while living in New York, but he did a lot of work on the characters of Max and Tony, who are drastically different from each other. “I had this grid I kept adding to,” he says. “These are their differences. I saw them as a left brain/right brain thing. They are exact opposites. I spent a lot of time figuring that out beforehand so I had the characters locked down.” Once his stint at AFI began, Kivney decided to make Max and Tony his first script there. Though he usually outlines heavily for most projects, this would not be one of those times. “The specific workshop I was in was pretty loose with the outlining process. Whatever works for you is what was pushed.” Though he knew certain tentpoles in the narrative, what he did was basically outline 15-20 pages of the script at a time and then write up those pages. “It was almost this weird, serialized structure. I would turn in 15 pages, submit it to friends, get feedback on it, then outline the next 15 pages and get feedback on that. That’s not my usual process, but it weirdly worked well for this. I wasn’t overthinking it too much and had a lot of fun working that way.” He notes that the way he wrote this mirrored the story itself, which sees Max and Tony navigate their way through apocalyptic New York and encounter different people and obstacles along the way. “It does have a bit of an episodic structure, so it was good for this one, but I’m not sure if it would work for every script.” 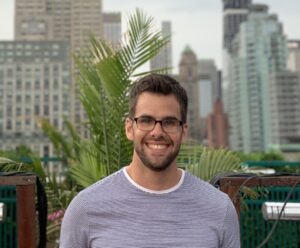 Because of the piecemeal way he crafted the script, there weren’t a lot of major changes to the plot throughout the process, though there was a change in tone. Kivney admits his first draft leaned heavier on the action side of things—perhaps a little too much. The script started to come together when he backed off that angle and focused more on the romance between the characters and just made them bystanders to the alien attack. “I like it more grounded and that they’re lost within this wider thing going on,” he says. Early on, Max and Tony were more involved in the goings-on in New York rather than the bystanders they end up being in the final version. “There were versions where they were more active in fighting this larger apocalyptic thing that is happening, but I like it that they’re lost within this wider thing. They’re just part of the crowd. In the monster movie, they’re part of the large mob fleeing Godzilla, not the scientists that have found the thing to defeat him.” The writer found that making Max and Tony’s relationship the driving force was the key. As fun and disgusting as the monster attack sequences are in the script, the story connects because of how invested the reader is in the blossoming romance. “I love genre scripts, but I also deeply, deeply love rom-coms. The more I gave into that and realized this is a classic rom-com story, the better it got. The romance is the story, and it just happens to have gruesome alien carnage happening on the side.”

The relationship between the two culminates in the best scene in the script at the end of the story’s second act. Max has just been bitten by one of the monsters, which means he will soon turn into one himself. Tony acts quickly and removes it from Max’s body before the damage can be done. That tense sequence segues into the pair talking, which then quickly moves into them making love in the most romantic of locations New York can offer: the dirty floor of an abandoned Duane Reade pharmacy. The love scene is both moving and hilarious, with Kivney shifting easily from heartfelt dialogue to the pair debating the sexuality of Elsa from Frozen. It also serves as a bookend to the film’s opening scene, where the pair have an awkward, truly forgettable sexual encounter. “Originally, the only sex scene in the script was the first one,” Kivney says. “At first they were just going to kiss [in the pharmacy], but I had so much fun writing the first awkward sex scene, and in popcorn movies like this, you don’t really get to see a gay sex scene like that. I didn’t want it to just have the awkward, humorous one. I wanted one that felt like a meaningful, beautiful moment between these two people coming together. At that point in the story, there’s been so much of this weird horror with the monsters and what the characters have been through that a kiss felt anticlimactic. This felt natural.”

While at AFI, Kivney participated in a pitch session that connected him with Kaplan/Perrone Entertainment manager Michael Wilson, who signed him as a client. Wilson sent the final draft of Max and Tony out to the industry in October 2021. Kivney’s script is so strong it made the Black List less than two months later, as votes are due in early December and that didn’t allow a lot of time for people to read and vote. “That’s a testament to Michael,” Kivney says of his rep. “He did a good job getting it in front of a whole lot of people, so all credit to him on that one.” Since then, Kivney’s career is in ascent. The strength of Max and Tony garnered him tons of meetings, and Wilson sent out a second spec just a month after making the coveted Hollywood compendium—the rom-com Best Man, where a groom to-be reconnects with a childhood friend and falls for him on the eve of his wedding. And despite what would undoubtedly be a high budget to bring the aliens to life on screen, there’s been major interest in Max and Tony. But even if nothing concrete takes place, Kivney is undeterred. “It’s an out-there movie, and I know it’s not necessarily for everyone. I wasn’t writing this to get it made. I just wanted to write what my big, crazy dream movie would be, and hopefully people connected with it.”

Did you enjoy this preview? To read the full issue and tons more in Backstory Magazine, click HERE to subscribe or buy it as a single issue.

For more info about all the other amazing articles in issue 46, view our Table of Contents.