If you enjoy what you read below – we hope you’ll join us to read the expanded version of the article and the rest of the issue by subscribing to Backstory Magazine!

Showrunner Eliza Clark on how she cracked the adaptation for one of the 21st century’s great comic books—after many tried.
By Danny Munso

Spoiler Warning: This excerpt discusses plot points from the entire first season, so proceed with caution

Eliza Clark was meant to do this. For 15 years, Y: The Last Man — one of the best and most important comics of the 21st century — had garnered a reputation around Hollywood as being unadaptable. Various writers and directors took their cracks at getting writer Brian K. Vaughan and artist Pia Guerra’s masterwork made even before the 60th and final issue was published in 2008. There were several failed attempts at a film by New Line, before the rights to the comic reverted back to its creators in 2014. And then FX stepped in and pledged to do the comic as a TV series, seemingly a much better fit for the material. Yet after a cast was announced, that version stalled, too, and original showrunners Michael Green and Aida Mashaka Croal dropped out in 2019.

That’s when Clark was asked to pitch her idea for what a Y: The Last Man series should be. It’s not a surprise that she is the writer who finally brought the idea to life considering her past success as both a screenwriter and playwright. But she also had a strong personal connection to the source material. It is her favorite comic, having first come upon it back in 2009, when it was gifted to her by a fellow writer she had met on the short-lived (but incredible) AMC series Rubicon. A few short years later, that writer — Zack Whedon — became her husband. Clark pitched a version of the show that was both loyal to Vaughan and Guerra’s original story yet diverted from it in major narrative ways. “The way I think about adaptation is if you love a song and you want to hear a cover of that song, you don’t want to hear somebody sing it the exact same way,” Clark says. “I love the comic books so much, and I think sometimes in media, comic books get seen as IP just there to become a movie or TV show. I don’t think of comic books that way. They are their own medium. There are things about it I changed for the show because it just doesn’t work in live action but it works great in the book, and if you love Y: The Last Man the book, it’s there and it’s perfect.” 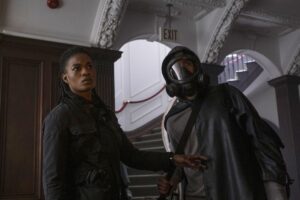 As the writers broke the story, they realized they simply had too much. Vaughan’s writing in the comic goes at a breakneck pace that the TV series simply couldn’t afford to duplicate. “Brian and Pia were so generous with us in saying we could make it ours, so I felt like we could pull what we needed from the book and focus the story how we wanted,” Clark says. “Our story is 10 major characters in an ensemble that are all undergoing major changes in the first season. So there were other story ideas we got excited about and other places they were going to travel to, but we decided to move a lot of those to a later season. We didn’t want to water down the story and have too many stories to tell. That happens on a lot of television shows: You end up winnowing down to the things you’re most interested in and the things that are most compelling in that moment to you.” One significant deviation from the comic involved the removal of Alter Tse’elon, an Israeli military officer and one of the books’ major villains. “She was definitely a character we were going to see this season, but she ended up falling out. There was too much story to tell with the characters we had.”

In a season full of standout storylines, the best of them all deals with Yorick’s sister Hero (Olivia Thirlby) and her indoctrination into an anti-men cult known as the Daughters of the Amazon. This is a major expansion of what we see in the comic, where when we first meet Hero, she is already a part of the group. Here we see how that happens over multiple episodes, and Clark and the writers dive deep on the Daughters’ formation as well as how their self-appointed leader, Roxanne (Missi Pyle), came to be. “The Daughters of the Amazon work great in the book, but I wanted to understand why Hero might fall prey to something like that,” Clark says. “I wanted to see them form because I also knew the first season was going to have a tight timeline and take place not that far from the actual event [where everyone with a Y chromosome perishes]. So much of what the show is about is how these characters you get to know before the world ends change so dramatically, and I thought actually seeing her change was part of the fun of the storytelling. 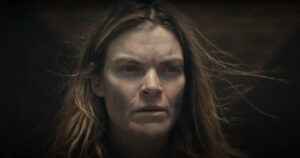 The season’s eighth episode — “Ready. Aim. Fire,” penned by Coleman Herbert, who worked with Clark on The Killing — goes deep into Roxanne’s history, not only how she came to front this group but her own personal history. Slowly over the episode, it’s revealed that Roxanne has completed a series of deceptions that fool these women into following her, such as posing as a cop and hiding a series of murders she committed after the fall. In a brilliant move, the writers chose to show us Roxanne’s past throughout the episode both out of sequence and in reverse order, à la Christopher Nolan’s Memento. It beautifully saves some of the biggest reveals in her story for the end of the episode while being a unique way to give the audience crucial information. “Truthfully, part of it comes from I really don’t like flashbacks,” Clark laughs. “I think flashbacks are lazy storytelling. I think if you’re going to do flashbacks, you have to do something interesting with them so it feels like you’re not being fed the answer. I like when storytelling is intriguing and not feeding you the information easily.”

Of course, it would not be an adaptation of Y: The Last Man without speed bumps, so whether we will get to see what happened to Beth or anyone else remains to be seen. Before the first season finished airing, Hulu and FX announced they were canceling the series. Even more frustrating, a report by the Hollywood Reporter indicated the reasons had little to do with ratings or the reception of the show but rather actors’ contracts that were set to expire. Clark had just finished pitching her vision for a second season to FX execs and in fact has a multiseason plan for the show in rough draft form. “I do have a season two that I think is really exciting,” she says. “We’ve come up with stuff that’s fun and adventurous and sexy. In the first season, our characters are clinging to some version of who they were before, and by the end of it, for good or bad, they’ve decided that world isn’t coming back and they have to transform. So in season two they get to be the new versions of themselves, and I think there’s a lot of fun to be had.” Despite the cancellation, there remains an air of positivity that the show is not finished and will be picked up by someone, even if things are complicated by the various studios involved. Clark is undeterred. “I’m very optimistic about finding a new home. We are committed to this show.”

Y: The Last Man is streaming on Hulu now